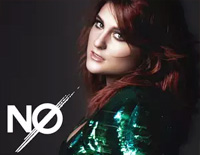 NO EOPN is provided for you and you can open it with EOP NMN Follow ME plugin to play NO piano by following it. Enjoy Now!

No is a song co-written by American singer and songwriter Meghan Trainor, who recorded it on, and released it from, her second major-label studio album, Thank You, which her record label released in 2016. No was released on March 4, 2016, as the lead single from the album. Produced by Ricky Reed, the song was written by Trainor, Eric Frederic, and Jacob Kasher Hindlin.